I really enjoy decorating for fall, but I don’t like spending a ton of money to do it; I’m a junker after all. When I got out my decorations this year I really felt like I needed a little something more to put in my kitchen. I really like the buttermilk colored pumpkins, but I do not like how much they cost. So, I made a trip to the dollar store to see what I could find.

What I found were some bright orange Styrofoam pumpkins that are about the size of an acorn squash. I bought three. Here is the before: 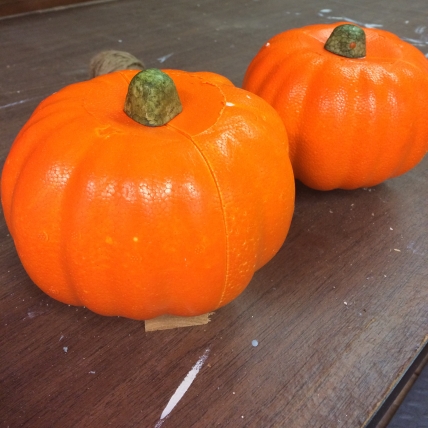 As you can see, they were not pretty and I wasn’t sure if I could improve them at all. I decided to use some off-white chalk paint that I had left over from another project, just to see what would happen. Whatever that orange coating is,  it was plastic-y and I was afraid the paint would just pool up and not stick. I did have a little trouble with that, but it was not as bad a I thought it would be. After about three full coats, they looked pretty good. I used a little brown gel stain to add some age/shading to them after the paint had dried.

After the pumpkins were painted, I used some copper craft paint that I already had (I have a paint problem!) to paint the stems. When they were done, I still felt like they needed a little something, so I went digging around in the bottom of my fall decorations tote to see what sort of goodies I could find. I NEVER throw away the little bits that fall of the fake flowers, picks, garlands and greenery…I just stick them in the tote.

There wasn’t much in there, I must have used them for another project, but I found enough to make it work. I  poked the ends of the bits into the pumpkin and used straight pins to hold them in place. They are not the finest piece of art I’ve ever created, but for 3 bucks and a little time, I’m pleased with the result. 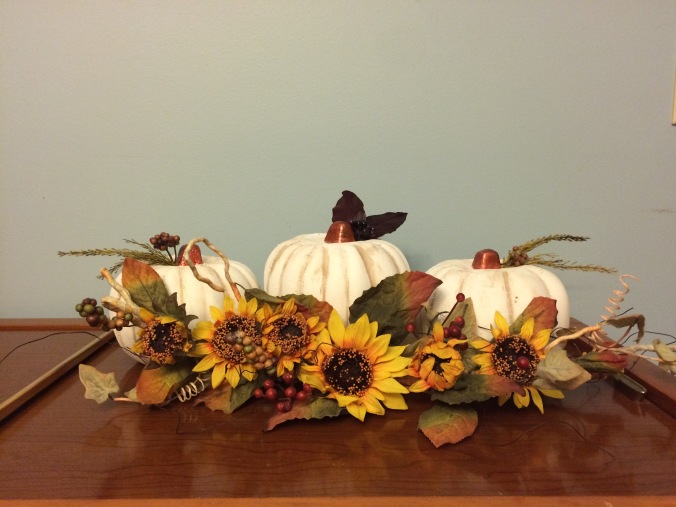 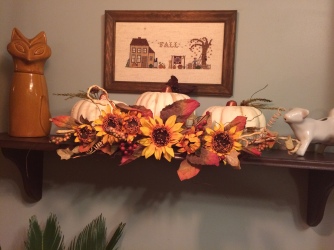 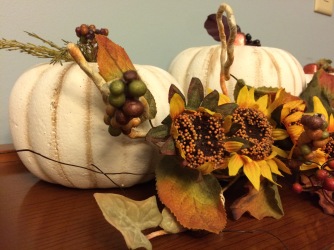 I love to hear what other people are doing; so, what sort of fun fall crafts has everyone else been working on this year?